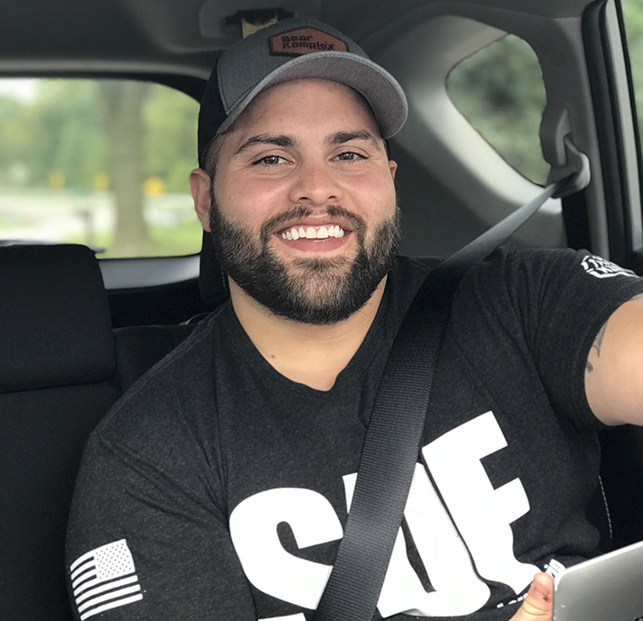 Nickname: ​Ironically my nick name is Dev… just so happened to get into an industry where my nickname shares the same nickname for development.

College: ​I attended Purdue University Northwest and dropped out in 2009 to start my first business.

Hometown: Born and raised all over Northwest Indiana. Valparaiso has been my hometown for the last decade.

​I love chest / upper body workouts. My favorite is bench though I have been neglecting it lately. Been slightly busy with other things ;).

​No go-to band per say but I have a Pandora station called Today’s Hip Hop that I have dialed in pretty well. Over the years I have Thumbs Downed enough trash artists that Pandora knows the type of hip hop I wanna hear. My Pandora channel has everything from Lil Wayne, Drake, Machine Gun Kelly, Eminem and select Cardi B and Nicki Minaj songs that are bangers lol…

Go-To Snack to Fuel Up?

What Inspired You to Start an App?

Being into fitness myself I was for sure attracted to the idea of developing something within an industry that I like. My inspiration for this app comes from the last 10 years of being a developer. In my experience, I have come across a lot of the “Next Big Things” in my time. Though some were good ideas they would always fall short of execution whether it was due to money or due to lack of experience, vision etc… When Brent sat me down to talk about this idea I grilled him on all those things. His response was inspirational. I don’t really value ideas the same way that most people do. It was very clear from the get go that this was a great idea. What was truly inspirational about this was finding out that the execution of this was attainable.

Is This Your First Startup?

This is my first mobile app startup that I am an owner of. I have personally launched several brands over the last 8 years. The company I started out of college was called websites2print. That company was acquired by a partnership I developed called Creavo Media. Creavo Media was a design and development agency. 5 years after that, Creavo was acquired by a digital marketing company out of Chicago called SearchLab.

Over my time I have helped build over 150 websites, a couple mobile apps, for both the private and government sectors. I have also done consulting for several national startups. I currently serve as director of business development for SearchLab Chicago where I consult with agencies, setting and delivering on expectations for referral clients with their local, regional and national marketing campaigns.